In Putting the Pavilion on the Map we showed how we put the Pavilion building on Google Maps. But Google Maps isn’t the only map application out there. Let’s check-up on the existence of the Pavilion on other digital maps and see the importance for not only tourists, but also genealogy technologists.

First alternative to check: Bing Maps. Microsoft’s map application, available via an app and the web, doesn’t have buildings though, there are only streets, railways, water and green areas (forest/park). The area where the museum and the Pavilion is located is just a grey area (see image below). There’s no possibility to make changes or add information to Bing Maps. 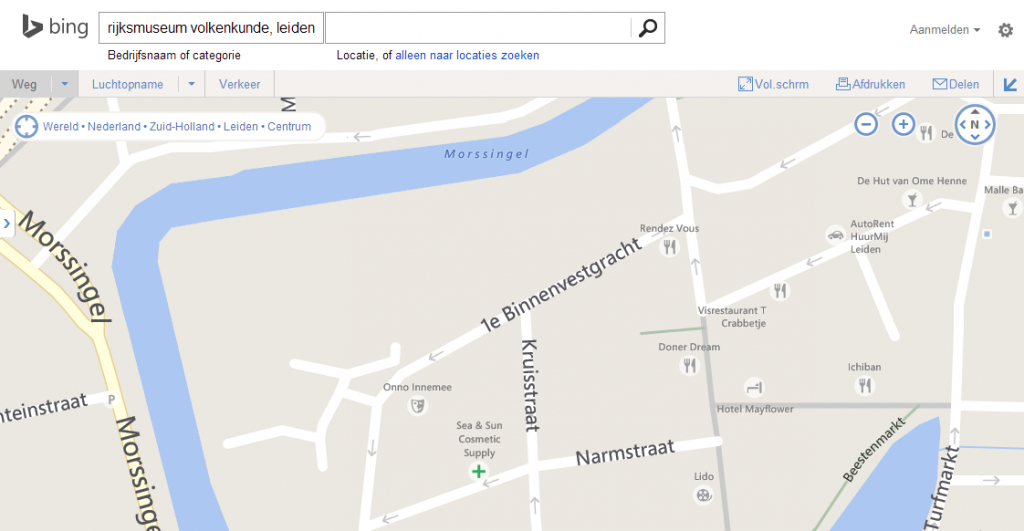 Bing Maps, zoomed in on Pavilion region – no buildings

The seconds map application we’ve checked was Apples map product. This application isn’t available on the web, only as an app on a iOS device. At first glance the map application look similar to Bing Maps: streets, railways, water and green areas. But on the selected area of Leiden there were no buildings visible (see image below). For some cities there are 3D buildings available, but the list of cities is somewhat limited, none in the Netherlands. Like Bing, this application is read-only. 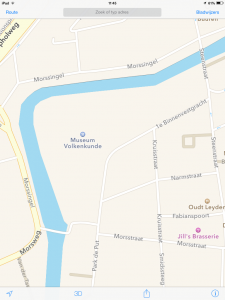 Maps app on iPad, zoomed in on Pavilion region

The third map application we reviewed was OpenStreetMap. After searching for the Rijksmuseum Volkenkunde, the right area with the Pavilion building was already visible. A closer look learned that although the contours of the building were present, the name ‘Paviljoen’ was missing. 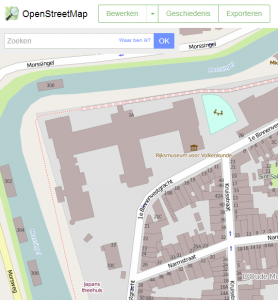 OpenStreetMap, zoomed in on Pavilion region – without name

The Netherlands’ Cadastre, Land Registry and Mapping Agency – in short: Kadaster – collects and registers administrative and spatial data on property and the rights involved. Part of this dataset (abbreviated as BAG) is available as open data so it can be re-used. Someone has taken this huge BAG dataset and transformed it so it could be added to OpenStreetMap!

OpenStreetMap, zoomed in on Pavilion region – with name

Apparently, this dataset didn’t include building names. No problem, just login, select the building and add the name to the object. Where Google needed some time to approve the addition, the name of the building was visible on OpenStreetMap within minutes! The ‘open’ part of OpenStreetMap doesn’t stop at open ‘input’, there’s also open ‘output’. The OpenStreetMap data is available for download as open data. This means this rich geographical dataset can be reused!

How does this relate to genealogy technology?

Some archive records from census and civil registry have addresses as meta-data. Addressed can be marked on a map!

For example, Andries Dorland, born on 16 November 1889 in Utrecht (Netherlands) was registered in Leiden on 30 November 1901 with residence 1e Binnenvestgracht 9 in Leiden. This address is easily looked up on Google Maps and OpenStreetMap. But let’s make it more interesting: use a historic map of Leiden. Georeferencing the map (from 1897), so you can view it on map with another projection system (like WGS94), isn’t that hard because the center of Leiden hasn’t changes a lot. The resulting map is off by some metres compared to Google Maps, this can by due to the old map being inaccurate or the skills of the georeferencer…

And now let’s highlight the street, which is the user-friendly option. This is where the open data of OpenStreetMap comes in. The OpenStreetMap data contains the streets of Leiden, not only the names themselves but also the coordinates (lines). This data can be used to show Google Maps with the historic map of Leiden as an additional layer and the 1e Binnenvestgracht drawn as a line. The reason the whole street was drawn and there wasn’t placed a marker at the exact position of the house is because numbering systems have changed over time, so you can’t rely on the current numbers. Click the image to view the interactive version of the map: 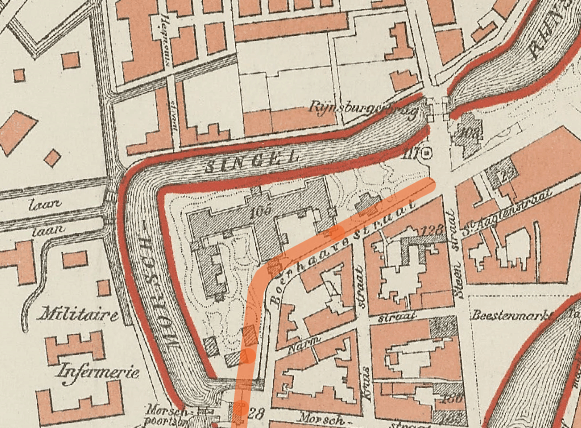 Historic map of Leiden, zoomed in on Pavilion region

By the way, did you notice the Pavilion building on the historic map? Seems there used to be two similar sized buildings near the Pavilion which have disappeared over time.